How To Produce Engaging Managers

How To Produce Engaging Managers

Professor Cary Cooper, President of the CIPD, wrote an interesting article on the EFS Blog about the UK’s continued failure to address the matter of low productivity. This is an issue which has been around for well over two decades. We seemed to be at least addressing the problem in the early noughties but since the financial crash of 2008, things have got materially worse.

There are many factors that influence productivity, but Professor Cooper hits the nail on the head by singling out the quality of people management in the UK. As he says: “we have managers who are technically strong but not good people managers. They lack emotional intelligence”. Now I have not seen any detailed research on this particular subject, but there seems to be sufficient anecdotal evidence around to indicate that nationally we may have a specific weakness here.

I have been beating the drum on this particular subject for nearly three decades now and have been saddened by managers “getting” the benefits of an engaging style intellectually but failing to do anything about it. My conclusion is that we in the UK are pre-occupied with the short term and are certainly less inclined than, say, our continental cousins to take a longer view on organisation improvement. The drive therefore must come from the top of organisations in the way that they judge performance, along with their external key influencers.

However, trying to explain the vagaries of the link between emotional intelligence and productivity to the average venture capitalist is often in the too difficult category. The link between the two is too obscure and simply not on their radar.  Many non-executives with a fixation on the numbers of the P& L account or the balance sheet likewise have little patience with the behavioural science underpinning engaging management. There a few absolute metrics to satisfy their wish to monitor progress in the microscopic detail that accompany the financial accounts.

For engaging managers to succeed, it needs to be constantly at the top of the managerial agenda. Without a committed leader who preferably is evangelical on the subject, it soon becomes just a flavour of the month and dissipates when the next crisis comes along.

Likewise, this short-termism brings along an attitude of “getting by” or “near enough”. In trying to help a company improve its bottom line a couple of years ago, I identified that manufacturing waste/ customer credits were riding at more than 5% of revenue, giving a several million-pound opportunity to the bottomline. The argument was dismissed abruptly as “these were the industry standards or norms”, as if this justified the colossal annual cost – as if it couldn’t be countenanced that the company could steal a march on its competition. Without this longer-term approach then the pursuit of Toyota level efficiencies is dismissed as a pipe dream.

The irony is that if properly introduced and consistently prioritised, engaging management can be transformational in quick time. It is also very safe, there is no downside, and it can be done at minimal cost.

It would seem that the answer lies in education, and something more influential than the odd seminar. Twenty years ago, Business Link Lancashire worked with Lancaster University to develop the LEAD programme to foster a broader, more relevant and holistic approach to management. It was tremendously successful but relied on heavy subsidies from the now defunct NW Development Agency. As a consequence, without that focus on the national interest, it eventually faded.

Interestingly, a small far-sighted operator called Quolux in Cheltenham resurrected the programme on a self-funded basis, without governmental subsidy. The results are very impressive with a new generation of managers/ leaders emerging in that area, who are better equipped technically and emotionally, to optimise performance.

So, my best wishes to Engage for Success in their initiative on people and productivity. Perhaps the frightening economic consequences of the Covid recession may move some in government to take a longer view of improving the nation’s efficiencies and finally turn David and Nita’s dream into reality.

Stop Talking About What Drives Employee Engagement - It’s About WHO Drives It!
High Pay Differentials and Engagement
Streamlining Your Business Post Lockdown
How We Unintentionally Engaged Employees with a Simple Tool
Employee Engagement in the news this week (via Engage for Success 25/11/12) 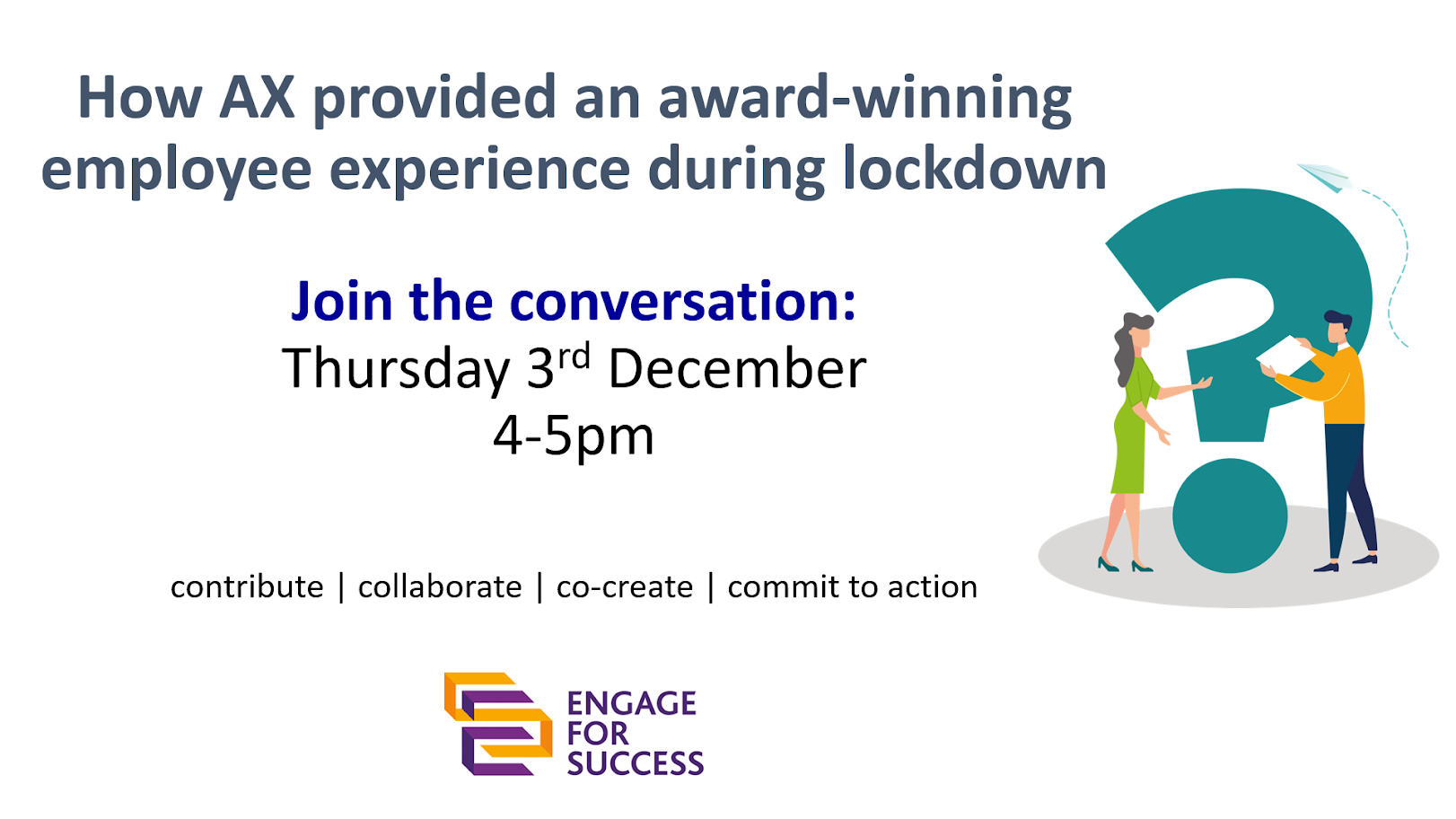 How AX provided an award-winning employee experience during lockdown