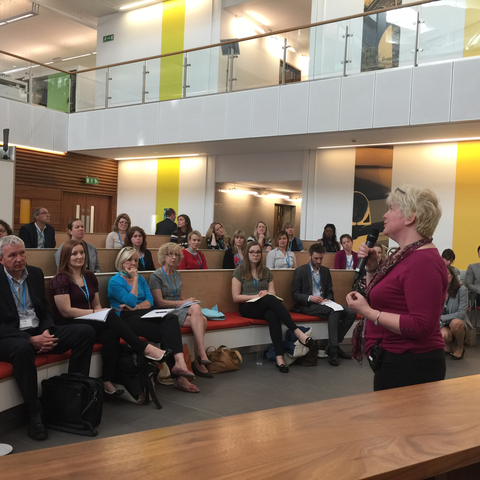 About a third of the employee population is engaged; another third is disengaged, while those in the middle are a bit ‘Meh, work’s OK I suppose’, Cathy Brown, executive director of Engage for Success, told the inaugural meeting of Engage for Success Milton Keynes in May.

‘When people are not engaged, there’s an impact on how they work – they get ill, they don’t feel committed, they don’t work as hard. It affects societies and economies. There is an economic imperative to improve that situation.’

Given that the subject is almost absent from party political manifestos and economic planning, she reported that Engage for Success had lobbied for people management and engagement to be included in the Government’s recent Industrial Strategy Green Paper, and pledged to continue campaigning.

A highly interactive breakfast meeting, with plenty of questions and contributions from the 60-70 delegates, included discussion on how to improve matters. Focusing on lifting the enthusiasm of the middle group is likely to be the most profitable, as it is likely that this population is receptive to better management. Cathy related how a Marks & Spencer store manager kick-started a significant improvement in morale and store performance simply by learning every staff member’s name, and treating them as individuals.

The nature of the work involved is no barrier to engagement, she reported; one of the most highly effective and engaged teams at United Utilities are those who work on cleaning the sewers, she pointed out.

Workplaces and technology are changing rapidly; people are less deferent, and expect to be given a voice. The feedback features of the likes of TripAdvisor have spread to the employee experience, with Glass Door creating a platform for views on workplaces, affecting the employer brand. ‘At the moment, we think of engagement as something that “we” in management, do to people already there, but that’s not early enough,’ said Cathy. ‘You have to ask: how do you engage people who don’t even work for you yet? The coming generation is small in number. They are going to have their pick of jobs. You are going to have to think really hard about how to engage them.’

The workplace is becoming extremely diverse in terms of age, with the spread of apprentices at one end, and delayed retirement at the other. Some staff may be six decades older than others. There are common features at all age groups, but potentially some cultural differences, in terms of what motivates them.

Katy Downes, senior engagement manager at Network Rail and Task Force member at Engage for Success, which were hosting the event, described the immense challenge of communicating with a large, geographically dispersed workforce, many of whom spend their working hours on tracks, away from a screen.

Her team has been tackling the disparity between calls for action from employees and their implementation, and reported a marked improvement from 37% happy with responsiveness to 56% in just a few months, between autumn 2016 and February 2017. The organization had arranged a ‘You Said, We Did’ campaign across various means of communication – social media, meetings, posters, videos and billboards. ‘We brought it to life with real stories from colleagues across the organisation,’ she reported.

Also at the meeting, engagement specialist Silke Brittain of Headlines Corporate News facilitated a conversation around effective approaches to boosting workforce engagement. Discussions included the merits of an annual employee survey, and included the view that the formal performance appraisal tends to have a negative impact. The best approaches are continual and interactive, several participants reported.

The Engage for Success MK event was held on Thursday 18 May 2017 at the Network Rail office, The Quadrant, Milton Keynes, MK9 1EN. The group’s next meeting will take place on Thursday 21 September. For more information email silkebrittain@gmail.com

Image courtesy of Engage for Success

How to avoid post-Brexit paralysis and foster employee engagement
Health is the new wealth
Show #277: The Challenges of Engaging Remote Teams
Show #186: Digital and Social Tools to Aid Employee Engagement
Radio Show #359: A Round Up of Engagement Themes Discussed in Recent Times