In April 2016 we published Further Evidence, an update building on Nailing the Evidence and offering commentary on the evidence base, advice on how to approach the topic, and thought-provoking and practical guidance for organisations seeking to build their own business case

Further Evidence showcases eleven new, robust case studies which add to the evidence base for Engagement being linked to Performance in organisations. They come from both public and private organisations, across sectors. They focus on measures related to Productivity, Customer Impact, and Wellbeing.

Further Evidence discusses the continuing definitional challenge of Employee Engagement, concluding that what matters more than the choice of measure and model is the organisational response, and the Change Management capabilities within the organisation. It shows that while some evidence points to links with performance, the really compelling case studies show a Return on Investment against the cost of improving engagement. It asks, if links exist with performance, why evidence is not easier to find. It offers advice to organisations wanting to build their own business case, highlighting the value of ‘light’ and ‘full fat’ business cases and how to go about creating them. It concludes with a Call to Action.

In the higher education sector, a study by ORC International showed that higher levels of employee engagement of University staff is linked to higher level of student satisfaction.

In retail, the Cooperative Group has established links between engagement of colleagues and customer satisfaction in stores. Their top quartiles stores (by engagement) outperform the bottom quartile by an average of +0.2% overall customer satisfaction, and +0.3% on ratings of “friendly and helpful service” (both differences are statistically significant), by an average of +4.2% sales over budget (equating to £14,000 of additional sales), and an average of -0.2% short-term sickness. Links to lower sickness absence were also identified.

In retail in the US, SaveMart established links with customer satisfaction (measured via Mystery Shop) in an unusual study which used a control group of stores over many months. A key focus of their approach was on Voice, working with a technology partner to boost social recognition (whilst aligning it with strategy). They more than doubled the proportion of stores hitting the target 90% customer satisfaction score (whilst control group stores registered no change).

In retail, Maplin have established links with store sales performance. The better half of stores which managed engagement well outperformed their sales budgets by £1/2M more than the other half of stores, and grew year-on-year sales by £1M more.

A retail client of AonHewitt provides an anonymised case study, where a 5% increase in engagement in one year led to a 0.4% increase in customer satisfaction the next year, which corresponded with an increase in store sales of over $15,000 per store.

In the financial services sector, RBS has established links between employee engagement and business performance, customer service and employee well-being. The top 10% of business units compared to the bottom 10% by Engagement delivered twice the business performance, incurred half the voluntary turnover, had Customer Service scores 5% higher, and had absence rates 2% lower.

In the Entertainment sector, Cineworld have established links between Engagement of staff in cinemas and the customer experience (measured via customer surveys). 9% of variations in the customer experience could be linked to engagement, with the Top Third of cinemas (by Engagement) registering +8% higher scores for “friendly and helpful staff”. Links to salesof food and beverages, and to staff retention, were also established.

In the service sector. Serco has established links to Contract Revenue (vs Budget). The best half (by Engagement performance over 3 years) of 75 contracts studies outperformed the bottom half by several million pounds (vs Budgets). Serco also established across 47 contracts staff turnover was 20% lower where staff were more engaged, and across 72 contracts 30% lower sickness absence where engagement was higher. 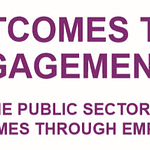