Businesses are realising that their human resources (HR) departments have the power to contribute and influence much more than what was previously believed.

The buzz around Employee Engagement efforts such as company events and activities demonstrates that HR departments have the potential of giving employees so much more than just great vibes. HR can be instrumental in facilitating actual motivation resulting in improved productivity.

This shift has made HR stronger and placed engagement at the cornerstone of organisational change management processes, which, in turn, allowed employee engagement to develop past the confines of the HR department and into a full blown business concern.

Why is the Bubble Bursting With Regards to Employee Engagement?

Aon surveyed 5 million workers in 1,000 organisation and uncovered that 24% said they were highly engaged and 39% were moderately engaged.

The study attributes the decline in employee engagement to the current political climate in combination with technological advances threatening job security.

This statistical downturn may surprise many readers but the fact of the matter is it shouldn’t. Employee engagement is down for the first time in years because we are failing to meet the expectations of the millennial, tech-savvy workforce.

Not this again, you’re probably thinking. Not another posts about millennials in the workplace. Well, there’s a reason you’re seeing all those posts. It’s because millennials are a large part of the workforce and they’re only getting bigger.

Millennials in the workplace in a highly debated issue and they’re getting a lot of flack for being undependable and quick to leave their place at the first sign of any difficulty. However, they are also known to crave engagement and a strong corporate culture that motivates, involves, and empowers them. So if engagement is declining will that mean greater employee churn?

Before we can answer that, we need to first understand why is this all happening.

A gig economy is a labor market characterized by the prevalence of short-term contracts or freelance work as opposed to permanent jobs. Gig jobs are becoming increasingly popular with the younger workforce who are looking to sustain a flexible lifestyle that balances work and social lives successfully. Deloitte expects that by 2020 40% of the workforce will be employed in gig jobs.

The gig economy has been fueled by the success of gig platforms like AirBnB and Uber, which connect customers and gigsters in a mutually beneficial way. This has created a whole new economy that, as I mentioned earlier, is only getting bigger every year.

The gig economy has also began to seep its way from the Ubers of the city streets to the corporate headquarters that line them. It’s not uncommon for employees to expect the freedom offered by the gig economy in jobs considered to be 9 to 5. This has led some experts to believe that the job market is headed for an “Uberization” of the workforce.

Companies that want to retain and attract top young talent need to accommodate this growing trend. Great flexibility in work hours and locations has become a very common and expected benefit. It’s not just about working from home, the modern workforce can have team members collaborating from different places around the world. This globalisation of the workforce is not only happening in large multi-national corporations but also in much smaller organisations who find that it allows them to recruit better talent at lower costs.

So Where’s The Rub?

Irregular work hours, high employee turnovers, a global workforce working from home or on the go means a huge challenge for HR and employee engagement efforts. When you think about it, current workplace trends are effectively dis-engaging workers, which could explain why employee engagement has been declining for the first time since 2012.

How to Increase Employee Engagement in the Gig Economy

We’ve concluded that despite the fact that an increasing percentage of employees want to be engaged and corporate management has a clear interest in encouraging it, engagement is decreasing. One very possible explanation is that companies lack the necessary tools to engage the millennial workforce.

In a gig like economy, the workforce is mobile and flexible and the way HR departments engage should be the same.

Sodastream, now leading the food & beverage industry in the manufacturing of green and sustainable beverages, was, until only a few years ago, a small carbonated beverage manufacturer. Then, they made the brilliant decision to jump on the sustainability bandwagon and have quickly ballooned from a workforce of around 30 employees to one in the thousands.

Obviously, the old way of doing things had to change but before operational changes could be implemented Sodastream needed to engage a young, multilingual, and deskless workforce.

For Sodastream, the main challenge was creating an effective means of communication with workers that did not have daily access to email. Their HR department decided to use Connecteam’s employee app to easily communicate employee benefits like daily lunch specials, giveaways, expense reimbursements, and company events.

The response was better than they expected with workers engaging company messages daily. The employee app, which can be found in app stores as “Soda App”, was so successful that it grew beyond the HR department and is now being used to report workplace hazards and communicate general feedback from workers to their managers.

In addition, engagement needs to go beyond the HR department. Whether their team is sitting together in one office or scattered around the world, (successful) managers need to place an emphasis on receiving feedback from their workers and having their finger to the pulse of the general sentiment.

For good or bad, the millennial workforce is a mobile, flexible, and fast paced workforce. They want to be engaged by their employer the same way they engage their friends and family. That means that successful employee engagement needs to be frequent (daily, in fact), provide value (entertainment is valuable too), and the experience of being engaged by your employer should feel comfortable and natural. if we adopt this form of employee engagement more readily I firmly believe that the current trajectory of the employee engagement graphs will quickly pivot.

Image courtesy of Vlado at FreeDigitalPhotos.net 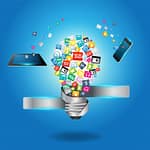 Get Your Workplace Talking: How to Encourage Communication