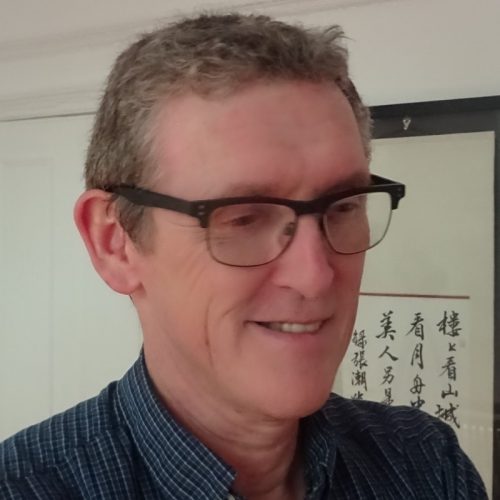 News BriEFS caught up with volunteer Gary Gill to ask about his roles in EFS and how a conversation at a nightclub transformed his career.

How did you get involved in the movement?

Naïve as it sounds, it was an epiphany for me when I realised engagement could not simply be boiled down to a number or a percentage. It is way more nuanced than that. This realisation stirred my interest and I wanted to understand more. At that time, EFS advertised a secondment vacancy for Director of Research, overseeing the work of all the TAGs. I was eager to be involved in something that would help make ‘going to work’ a more rewarding, fulfilling and enjoyable experience for people.

I was lucky that my employer was (and still is) really committed to engaging its people so I was able to apply for the secondment and a month later, I was in the thick of it in EFS. Once the secondment ended, I was able to stay attached to EFS, by now focusing primarily on the public sector side.

Tell us about your role at EFS.

As Director of Public Sector Innovation, my role is to identify and promote ideas, projects and resources that help to raise engagement levels in public sector organisations. That doesn’t mean it has to be of exclusive interest to the public sector. I also have a private sector background professionally.

What is your day job?

I work for HM Revenue and Customs. A lot of people think the Civil Service can be a bit stuffy and conventional when it comes to ways of engaging its people but in my experience, nothing could be further from the truth. It really seems to have an appetite to try new things and explore novel ideas. EFS has worked closely with many Civil Service departments and continues to do so. For instance, the Team Engagement Diagnostic, the Engaging Managers’ Zone and the Behavioural Science TAG are three pieces of work that are ongoing right now at HMRC. Even though it can take a bit of time to get approval for a project, once that’s been achieved, things tend to move very quickly.

What’s been your involvement in the Topic and Sector TAGs?

I have been very lucky to have worked with pretty much all the TAGs to some extent. I found a recurring issue was that most TAGs experience a dip in momentum between the flurry of activity at the beginning and their final outputs. This was understandable as TAG members volunteer their time and balance this against the other time commitments they have.

By connecting them with people such as the TAG Steering Group and identifying any available resources got most of them ‘across the finishing line’. This also freed up volunteers’ time to get involved in new TAGs and other EFS projects.

It’s said that ‘Success breeds success’, and it’s very true that when a TAG launches a report, online toolkit, or event, I’ve always sensed raised levels of energy and impetus in other TAGs and the movement as a whole. The TAG launches have been the highlights of my time with EFS.

It’s been a tough year for everyone. What has been a highlight in the past 12 months?

The “2020 Vision: Employee Engagement in the Public Sector” event at the beginning of last year was a fantastic experience. I was co-organiser with Sarah Pass and it was great to see that the months of preparation we had put into it came together so well on the day: the speakers and audience turned up(!); the venue (courtesy of Nottingham Business School) was fantastic and I think attendees found it useful as the feedback was great.

Having never organised anything on that scale before, I was buzzing for days afterwards!

How do you balance your work at EFS with family, career and other commitments?

For me it is about not dwelling on things that have already happened and realising that often you did what you thought was “right” at the time.  I try to do my absolute best but time is a finite resource. You often have to make a judgement call with incomplete information and limited time.  So, sometimes, you have to compromise “perfection” for time. Ever since I got that clear in my head, my family time was not interrupted by thoughts of work and other sensible stuff. There go my promotion prospects!

What do you do to unwind?

I got carried away buying old boats a few years ago. At one stage I had five, ranging from an inflatable dinghy to a full ocean-going, twin-engined 50-year-old wooden motor cruiser. Do you know the old definition of a boat? It’s a hole in the water into which you throw all your money. It is so true! So I sold the lot and bought a 40-year-old camper van.  I’m hoping our three-year-old daughter, Florence, will enjoy rattling around the country with us in the camper van.

Who has been an inspirational or transformative figure in your career and why?

Back in the 90s I used to own a nightclub. One of the customers always said that when confronted by a problem, he would ask himself ‘DIRM?’ (Does It Really Matter?) That helped him to take risks and focus on the important things, not the trivial stuff. I’ve tried to do the same ever since, so the most transformative figure in my career was a bloke I once chatted to in a nightclub!

What do you make of the Engagement Diagnostic Tool and the Engaging Managers Zone that were recently launched by EFS?

It’s serendipity again. Both of these fabulous resources were produced independently of each other and to different timetables. But they complement each other so perfectly and were both launched around the same time that many people I’ve spoken to believe they were designed around each other. I think they will be used for many years to come.

If you could share one message with the other volunteers at EFS, what would it be?

Don’t wait for ‘permission’ from EFS to pursue good ideas. Every volunteer is in their own driving seat so just go for it.