For a decade, the Engage for Success movement has been beavering away raising awareness and shining a light on good engagement practice. This was the purpose of the movement from the outset, as articulated by David MacLeod and Nita Clarke when the Task Force was formed at No 10. I’ve been involved from the outset as one of the original ‘Gurus’ (OMG), was a founding member of the steering group and led the first TAG (though we called them special interest groups in those days. A slightly dodgy title now I think about it. I’m glad we changed it…).

That first TAG was around the issue of Engaging Leadership – and in my view, we still don’t ‘get it’.

When we began, the ‘movement’ was a fairly broad mix of leaders, organisational development specialists and expert advisers. Quickly the predominant group became HR people and those working to support engagement surveys and initiatives. Now I’m not seeking to denigrate those people or the important work they do – but – in my view it has progressively skewed the focus of the movement and the field of engagement to the point where I now very frequently encounter organisations who proudly declare that they have an ‘engagement’ programme, when what they actually have is an annual survey. When I ask them who leads the programme, the answer is invariably HR. When I ask them what they are doing to shift leader behaviour they usually gaze blankly at me as if I’ve just asked them whether they have a parrot in every office. Many, many organisations and indeed many HR people and ‘engagement specialists’ seem not to see the huge connection and continuum of leader behaviour, culture, engagement and high-performance.

One does not fatten a pig by weighing it. Reliance on a survey smacks somewhat of tokenism. Box ticking. An agenda item in the second half of a management meeting.

Any intent to shape or shift the culture to create the conditions for better engagement in an organisation is poorly served by reliance only on data. People are emotional beings as much as – or even more than – they are rational ones. Clearly an accurate picture of culture, engagement and leadership capability requires a sound base in evidence. But it is not enough. We need to understand how people feel and more importantly why they feel that way. It has to begin with leadership and it has to be given impetus and be sustained by leadership.

Engagement is not an HR issue. It is a strategic leadership issue.

Indeed, engagement isn’t even the point. It is supposed to be a means to an end not an end in itself.

Surely the whole point of increasing ‘engagement’ is – to borrow a phrase from Juliette Alban-Metcalfe, co-chair of the TAG Steering Group – to enable sustainable high-performance, not just better engagement scores. In my view, that ‘high-performance’ also needs to be in the service of a compelling vision to achieve something that adds value to the community… and by community I mean the greater good.

To repeat: Engagement is not the point.

We will not recover from the devastation of a global pandemic by increasing engagement, nor will a movement of 2.7% on last year’s survey do very much, of itself, to improve organisational performance. Yes, we need to engage people – but I suggest we need to do it one at a time, through developing engaged relationships between leaders and teams, between the team members and between one team and another. Moreover, we need to engage and unite them behind a purpose that is intrinsically motivating and inspiring and which is articulated with passion and commitment by leaders at every level.

Others may disagree, but I’m not energised or motivated by a vision and goal of increasing market share by 1.3% or, worse still, increasing earnings per share or raising profits for people who already have way more money than they will ever need – and probably far more than their contribution and performance actually deserves.

The best way to engage people in a sustainable and high-performing way is not sweeties, freebies, bean bags or any of the other frippery that some organisations deploy instead of addressing the real issues. We know, beyond reasonable doubt, that intrinsic motivation is far more powerful and resilient than the extrinsic variety. We also know that intrinsic motivation is triggered by feeling inspired and connected to your leaders, team and purpose.

That can only be sustained by leaders who truly, madly and deeply ‘get it’ and are able to show, every day, the challenging combination of empathy, compassion, humility, confidence, determination, humanity, inspirational communication, critical thinking and mentoring capabilities of the modern effective leader.

Have you got lots of that sort of leader to hand? I hope so.

If not, what are you going to do about it?

Join us on Monday 12 April for our radio podcast interview with Nigel!

Leadership And The Barriers to Engagement – Engage for Success Masterclass 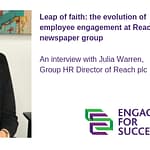